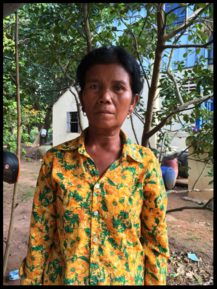 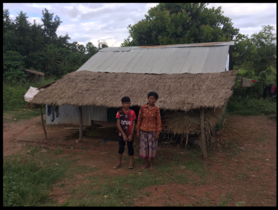 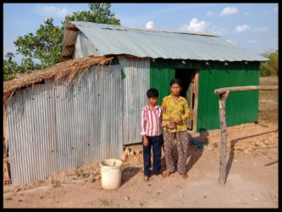 and that of her grandson.

Ming Kop's Story:
Ming Kop is 57 yrs old.
She has one child but no house. When we met her, she was living in niece’s house.
Before that, she was in a far away village and had a baby boy. When he was very young, her husband left her. When the boy became older, he wanted to marry so she sold the house and the land. Then he married and she lived with the newly weds. They had a boy then divorced. The ex-wife married again. So Ming Kop left with her son and grand son. Her son found a new wife in another province. Ming could not get along with her new daughter-in-Law. So she left with her original grand son (now 12yrs old grade 6) and came to live with her niece near Phum Om.

When we met Ming Kop, the niece was happy to give a piece of land but is telling Ming Kop that she needed to leave soon.
We think that she has eyes issues (cataracts probably).

While getting her a house built was in our plan, Ming Kop managed to build herself a small simple house. She went to the forest to get wood and 'sabov' (the grass they dry to make the roofing panels). She asked the neighbor to help her with some old metal sheets etc. She bought the materials needed and with the help of people of goodwill around her, she made her house. Then she asked for help because she needed to pay the debts she made: 700,000 riels (175$). So we donated $200 for her to pay the debts and finish the house properly plus $50 to build a bed (the traditional Cambodian bed is a wooden raised platform). We had actually set aside more money for her house but Ming Kop insists that the simple house she built is enough for her and her grandson. So we also donated $50 for a bike for her grandson to go to school!

If you would like to continue build decent homes for desperate families like this, please donate and we'll do the job!