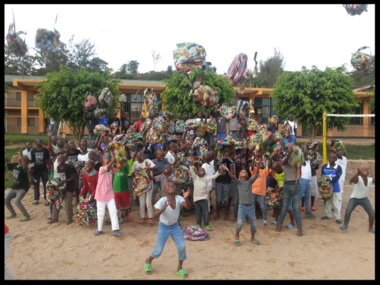 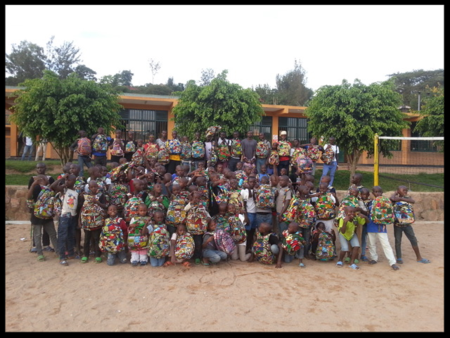 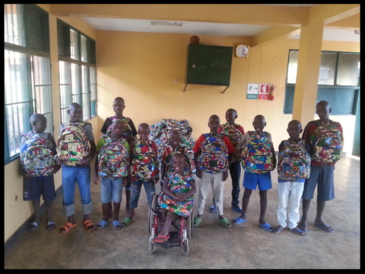 This was a brand new project for AKUN IN 2017 and we were very pleased to expand the reach of our mission!

Thanks to your donations, AKUN gave a much needed school bag to 110 students!!

AKUN spent $1760 of your donations on this project.

From Charles on completion of this project:
Dear Barbara,
I do not have enough words to thank you for your support !
I attached the pictures and list of kids who get the bags at the first time!
We gave 105 kids in total.
The remaining are in stock and will be give to the remaining who were at school.
Regards,

In December 2016, Barbara Sanders, AKUN Board member, had a conversation with her friend Lisa, about the needs of a school for street children, in Rwanda. Lisa and her son Ian, had returned to the school a number of times since first visiting it in 2010. The school for street children (boys) is based in Ndera, Gasabo district, Kigali, Rwanda. It is run by a non-profit organization, Les Enfant de Dieu, whose mission is:
“To transform the lives of Rwandan street children by meeting their basic and psychosocial needs, providing them with education and skills, and reintegrating them to become valuable members of society” http://www.enfantsdedieu.org/what-we-do.html

Barbara was put in touch with Charles Hazabintwali, the Project Manager at the school, to see what the needs were at the school and if there was a project for AKUN there. Charles put forward a project for 150 backpacks. He explained that the boys needed backpacks to put their school supplies in and for those leaving the school to be able to take their belongings with them when they are reintegrated into the community with their families or host families. Charles provided details concerning the cost of the backpacks, the timeline for making and delivering them from Ineza, where they were being made, and he was able to assure the Board that he would send receipts and photos on delivery of the backpacks. Another benefit of this project was that the backpacks Charles wanted for the boys, are made in Kingali by Ineza, a co-operative non-profit organization for women. So, with this project, 2 groups would benefit, both in Rwanda.

Read more about these 2 organisations:
http://www.enfantsdedieu.org/who-we-are

After discussing the impact the backpacks would have for the boys at the school, this project was exactly the type of project AKUN is interested in. It is a small scale project, that AKUN is 100% responsible for, which has a BIG impact on the boys at the school. Owning a backpack, keeping your books and possessions together in it, has a positive effect on the lives of the boys at the school. It allows the boys to carry their belongings from the boarding house to school and for those leaving the school they have a backpack to take their belongings with them.
The AKUN board agreed to fund 110 bags, which were needed immediately, at a cost of USD1760. Once we had agreed to the project, with funds available immediately for it, Charles ordered the bags, and the funds were sent from AKUN to Ineza. The project was underway! Charles sent receipts from Ineza for the funds we sent for the 110 backpacks. They were made within the 21 days, which was the timeline Ineza had given and the backpacks were handed out to 105 boys on April 11th 2017. Charles sent a list of the boys who had received the backpacks along with photos.​